Are We About To Witness The Next Great Equity Rally?

Are We About To Witness The Next Great Equity Rally? 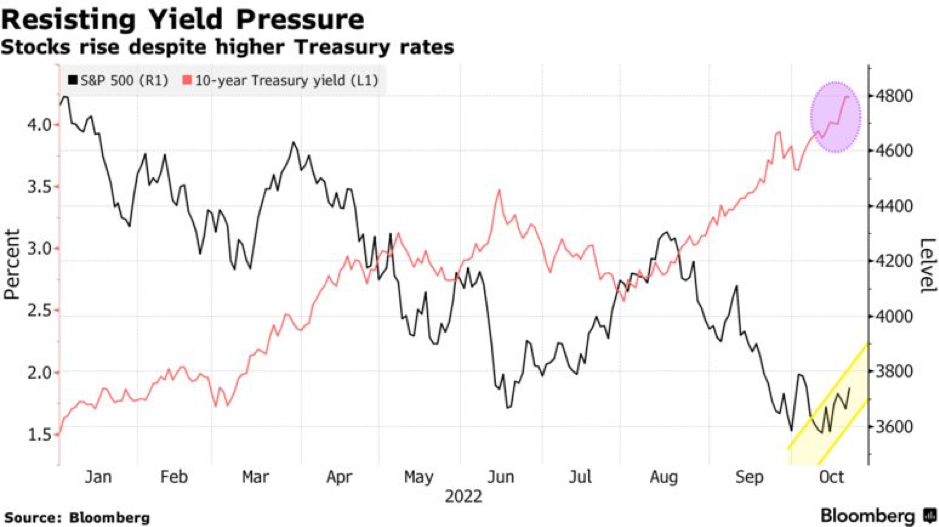 An Article of Interest:

This week’s article of interest is taken from Bloomberg News and written by Lu Wang and Vildana Hajric.

Shares surged the most in four months as evidence built that active fund managers are getting worried about missing a winter rally.

'It’s an old investment saw that cuts surprisingly well: the idea that institutional investors -- alert to catastrophe in the closing stretch -- bid up markets in November and December. The case is stronger in 2022 with midterm elections approaching, traditionally a pressure-reliever for bulls that on average gives rise to more gains.

The urge to embrace a year-end rally is visible in a poll by the National Association of Active Investment Managers, where big-money allocators are boosting equity holdings at a rate rarely seen during this year’s bear market.

Add in a flurry of buying in bullish options from traders playing a quick game of catch-up, and it’s a recipe for buoyant stocks that this week defied a surge in bond yields on a scale not seen in more than two years.

“There’s fear that if you have a sharp rally and you don’t participate, that in a down year you fall even further behind. That’s a genuine fear,” said Keith Lerner, co-chief investment officer and chief market strategist at Truist Advisory Services. “Most fund managers are aware of the seasonal trends, so a move up -- even if it’s a bear-market rally -- it could go a little bit more than one would think because positioning is so light.”

The S&P 500 climbed 4.75% over five days even as 10-year Treasury yields increased about 20 basis points, reaching the highest level since 2008. Such an equity advance in the face of that big a rise in yields hasn’t happened since June 2020.

Various explanations exist for the resistance of stocks to rates pain. Despite blowups from firms like Snap Inc., earnings season is off to a decent start. More than 70% of S&P 500 companies that reported results have beaten analysts’ profit estimates, data compiled by Bloomberg Intelligence show.

While the shock from September’s inflation reading has prompted bond traders to ratchet up bets on larger rate hikes from upcoming Fed meetings, a case can be made that a front-loaded tightening campaign could mean an earlier end to the cycle. That would provide some breathing room for equity valuations, which by one measure has fallen to the lowest level since 2010 relative to Treasuries.

“I do think a lot of the compression has already been taken care of,” Alicia Levine, head of equities and capital markets advisory for BNY Mellon Wealth Management, said in an interview on Bloomberg TV. “If you think we’re headed into a recession the first half of next year, you’ll wind up with lower yields eventually and that in a weird way is going to support the market.”

For a broad spectrum of money managers who have slashed equity holdings and raised cash to a two-decade high in preparation for whatever worst outcome may materialize, the biggest risk actually comes from an up market.

There are signs that the market bounce of late may have aroused some chasing. When the S&P 500 scored gains in two of the past three weeks, money managers tracked by NAAIM raised their equity exposure at the fastest clip this year, except for one week in March.

In the options market, interest in bullish bets is creeping up. Call options were in such high demand this week that the cost for those linked to the biggest exchange-traded fund tracking the S&P 500 fell to the lowest level since 2014 relative to bearish puts.

The investment community is “underinvested and might have more upside positioning on to ‘protect’ against a panic move to the upside,” said Chris Murphy, co-head of derivatives strategy at Susquehanna International Group.

History is not on the bears’ side when it comes to year-end performance, particularly during years when midterm congressional elections took place. Since 1942, the final two months of a year have enjoyed share gains about 75% of the time. While stocks experienced a similar frequency of positive returns at the end of midterm years, the index saw bigger gains over those periods, with the S&P 500 rising more than 6% on average.

“The main bearish theme for stock investors this year has been the old adage ‘Don’t fight the Fed,’ especially when the Fed is fighting inflation,” said Ed Yardeni, founder of his namesake research firm. “Perhaps, another old adage is about to play out: ‘Don’t fight Santa Claus after midterm elections.’”

We said a long time ago, that when the market starts to rally it could really fly as it will be exaggerated by money manger’s ‘fear of missing out’. With so much money held in cash, portfolio managers cannot afford to miss the move up as if it doesn’t drop down again, then it might be gone forever. This means that every rally will have a few panicking to get back in; the higher it goes, the more they’ll panic.

Getting out of the market is only a good thing if you get back in lower down. This is the problem being faced by wealth managers all over the world. If you take money out of the market and keep it in cash, then when indices move up all you can do is lock in even more of a loss.

Our traders and trading teams have been quite consistent since the large market fall. They maintained their 'mid term buy' positions, knowing that although it might take some time for them to come back, they would indeed- come back.

They have also initiated a number of 'short term trades' both on the buy and sell side. They've bought on dips, and sold at short term highs. A glance over the majority of our strategies in the month of October shows a trade log of many profitable trades.

In fact, the average strategy on TPP has now increased to positive 14% for the month predominantly generated via short term tweaks to the portfolios.

It's the best month for quite some months for our teams, and with the markets still dramatically undervalued, it is shaping up to be an interesting end to the year.