Investment Opportunity Of The Decade 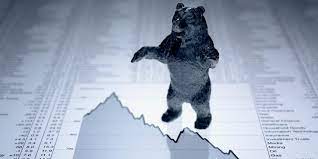 After some serious sized market retracements in 2022 we take a look at markets dominated by the big grizzly’s.

Bear markets are a necessary occurrence and have bounced back every single time. Here are a few facts:

· Watch for 20%: Market cycles are measured from peak to trough, so a stock index officially reaches bear territory when the closing price drops at least 20% from its most recent high (whereas a correction is a drop of 10% -19.9%).

· A new bull market begins when the closing price gains 20% from its low.

· Stocks lose 36% on average in a bear market. By contrast, stocks gain 114% on average during a bull market.

· Bear markets are normal. There have been 26 bear markets in the S&P 500 Index since 1928. However, there have also been 27 bull markets—and stocks have risen significantly over the long term.

· Every 3.6 years: That’s the long-term average frequency between bear markets. Though many consider the bull market that ended in 2020 to be the longest on record, the bull that ran from December 1987 until the dot-com crash in March 2000 is technically the longest (a drop of 19.9% in 1990 nearly derailed that bull, but just missed the bear threshold).

· Half of the S&P 500 Index’s strongest days in the last 20 years occurred during a bear market. Another 34% of the market’s best days took place in the first two months of a bull market—before it was clear a bull market had begun. In other words, the best way to weather a downturn could be to stay invested since it’s difficult to time the market’s recovery.

· Assuming a 50-year investment horizon, you can expect to live through about 14 bear markets, give or take. Although it can be difficult to watch your portfolio dip with the market, it’s important to keep in mind that downturns have always been a temporary part of the process.

· Bear markets can be painful, but overall, markets are positive a majority of the time. Of the last 92 years of market history, bear markets have comprised only about 20.6 of those years. Put another way, stocks have been on the rise 78% of the time.


Most investors globally will have been wounded this year, but very often opportunity presents itself in adversity. We hope as an investor some of the facts above will reassure you that when the tide turns, there will be some large movements to take advantage of.

Make sure you're in the market, when the tide goes back out.

If you would like to maximise your returns when the markets reverse, then consider the trading strategies showcased at TPP. Our traders who have been recruited are elite and have track records of outperforming the markets on a multiple of 2-4 x per annum.